You are here: Home / Biblical Finance / Tithing / How to Tithe When Your Spouse Doesn’t Approve
105 shares 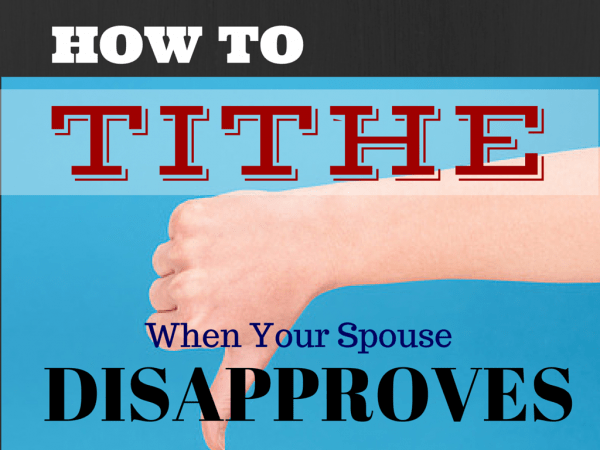 Tithing can be a real hot button issue in a marriage when both spouses don’t agree on the subject.  When one spouse is adamant about giving the tithe and the other is against it, there can be friction in the marriage.  That’s never good for maintaining a healthy long term relationship.

So what should you do if you want to tithe 10% of your income and your spouse is against it?  Well, that’s between you and God.  I don’t claim to have all the answers here.  But I do think I can help shed a little light on the issue that might help you out when it comes to being in disagreement about tithing.  I’ll also provide you with some excellent resources on the subject.

Whose Money Is It Anyway?

If you want to be a tither, you have probably already come to the realization that what that you have is really not yours, it ultimately all belongs to God.  You also know that He wants you to tithe 10% to His church as recognition of that fact, so He can bless you and others because of your giving.

Next, it’s important to understand that when you marry, you and your spouse become one.

Of course, that pertains to finances too.

As a married couple, even if you have separate incomes, all the income belongs to both of you.  That applies from a biblical standpoint as well as a legal standpoint.

Even though you may keep separate accounts and never combine your money (which I don’t recommend), you are still one financially whether both spouses agree or not.

But what if your spouse is an unbeliever?  Or what if they aren't at the spiritual level as a Christ follower where they believe tithing is necessary?  What do you do then?

Let's figure it out by taking a look at the unique roles of husbands and wives, and how each spouse is supposed to operate from a biblical standpoint.

Want to learn more about how to come into agreement with your spouse?  Read “Love and Respect: The Love She Most Desires- The Respect He Desperately Needs” by Dr. Emerson Eggerichs

Wives have a crucial role to play in the marriage that is different, but just as important as the husband.  According to the bible, a wife should submit to her husband just as she would submit to Christ.

“Wives, in the same way submit yourselves to your own husbands so that, if any of them do not believe the word, they may be won over without words by the behavior of their wives” (1 Peter 3:1)

This is not always what a woman wants to hear, but I’ve seen it work time and time again.  When you submit to your husband as the leader of the home, even when you disagree with him, God works on your behalf, and sooner or later your situation will get better.

If Your Husband is Against Tithing

So ladies, if your husband is dead set against tithing even when you know deep down that it’s the right thing to do, submit to the authority that God gave him.

Let God work on your behalf to help the situation.

Don’t force the issue or constantly barrage him with bible verses or books or questions about why he disagrees, you’ll just drive him nuts.

Just perform your proper biblical role and let God do the work.

Yeah, it's not easy, but when you get out of the way and let God work, He’ll work it out better than you ever could.

Do you and your spouse disagree about tithing? My latest post shows you how to handle the disagreement

Husbands also have a very special role in the marriage that is just as difficult as the wife’s.  As the husband, your role is to be submitted to God, and to love your wife as you love yourself, even giving yourself up for her (Ephesians 5:25-26).

That means it’s your job to love your wife and be the God appointed leader, which is a huge responsibility.

Love her unconditionally just as God loves us.  Be the example that God wants you to be.  Let Him do the work of changing her heart and mind.  It may not come quickly, but God will always act on your behalf when you’re performing your role to the best of your ability.

One thing you shouldn't do when it comes to tithing is to do it in secret behind your spouse’s back.  All that does is create distrust in the relationship and keeps both of you from coming together on the issue.

It may be tempting to tithe in secret and rationalize that it’s ok because God wants you to tithe.  He does want you to tithe, but He also doesn’t want you lying to your spouse about tithing and compromising your marriage because you’re being dishonest.

Be above reproach.  When you’re honest, God will again work on your behalf to resolve the situation.

Can You Come to a Compromise on Your Tithe?

Even though I believe money inside a marriage should be treated as “our money” instead of “his money” and “her money”, you may not have the same perspective. But, you can come to a compromise, even if one spouse is adamant about not tithing.

If both spouses earn an income, maybe you can work out a compromise with your spouse so that you can tithe on your income, and your spouse doesn’t tithe on theirs.  This can work whether you combine your money or keep separate accounts.

If only one spouse earns an income, things get a little more tricky.  Just because one person brings in the money doesn’t mean they have all the say financially.  But in many marriages this is the way it works.

You may be able to agree that a tithe is paid on half the income that's brought in.  This would represent the spouse that wants to tithe.  Although if the spouse that earns the income doesn't agree, this compromise might be a hard sell.

Here are a few great books that can help develop perspective on tithing and giving:

“Fields of Gold” by Andy Stanley

“Genius of Generosity” by Chip Ingram

Tithing Disagreements Can Be Tough

Tithing disagreements are never easy to deal with in a marriage.  It can cause a lot of stress for both partners to the point that it adversely affects the relationship.

My best advice on the subject no matter which side of the argument you’re on boils down to three things:

Question:  Have you ever had to deal with a disagreement about tithing with your spouse?  How did you deal with the problem?

More articles on Money and Marriage can be found here

More articles on Tithing and Giving can be found here