You are here: Home / Debt / Is There Really Such a Thing as Good Debt?
52 shares 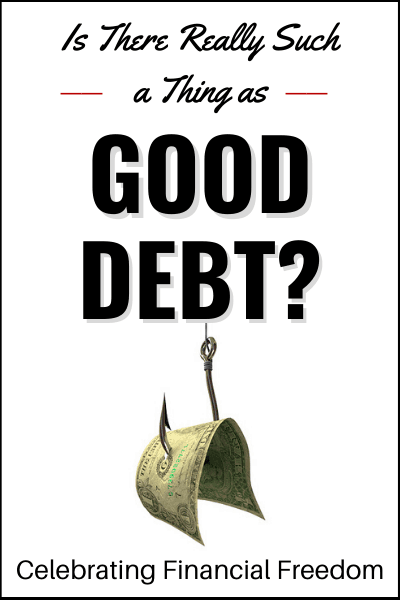 Over the years I’ve read a lot of books about personal finance, business, and investing. And many of them have one thing in common:  They encourage you to use debt to leverage the little money you have in order to make more.  They call this good debt .

You’ve seen those not annoying at all guys on TV exclaiming,  “Buy real estate with no money down”,  or “Use other people’s money to invest your way to riches”, and so forth.

On the face of it, it sounds really appealing.  I mean why wouldn’t you want to use somebody else’s money to make money for yourself?  Sounds like a slam dunk, right?  Some of these people will even try to convince you that it’s low risk or even risk free.  They even use the term good debt because if you use it right, they say, it will make you richer.

Is there such a thing as good debt, or is the borrower always slave to the lender? Find out here:

What is Good Debt?

So what is good debt?  Good debt is considered to be any kind of debt that helps you get a return on investment that's greater than the cost of using borrowed money.  Some examples of so called “good debt” are:

It costs a lot of money to go to college. But when you graduate, the theory is you’ll make a better living than you otherwise would have. Therefore, you'll be able to pay off the loan and do better over the long term.  But that doesn’t always happen, as evidenced by the student loan crisis.

A house is supposed to appreciate in value over time, thus making the investment worthwhile.  Again, as we saw a few years ago, that doesn’t always happen.

Investing in your business is supposed to get you a return on investment that allows your business to make more money. Thus you have the ability to pay off the loan as your business increases.  However, sometimes the business doesn’t see an increase, but the loan still has to be paid.

Borrowing money to invest in the stock market, real estate, etc. to get a return greater than you would otherwise get.  This is probably the most risky of all. Because when investments go south, they tend to go further south when debt is involved.

So what does good debt accomplish?  Well, it may help you leverage borrowed money into a profit when everything goes according to plan.  But plans don’t always work out the way you want them to.

But instead of talking about what good debt might do, let’s talk about what it will always do.

First, even good debt will always put you into bondage.  As the scripture says, “the borrower is slave to the lender.”  Every time you borrow, you give up some of your freedom. The more you borrow, the less freedom you have.

Second, it will always increase your risk.  With debt, everything has to go according to plan for good debt to get a return on investment.  Sometimes that happens, but sometimes it doesn’t.  Life happens, jobs go away, home values go down, and businesses go bust.

Third, you always pay more than you would have if you would have just used cash as your tool of choice.  Interest and fees add up, and that puts you at a disadvantage because you end up paying substantially more for things bought with borrowed money.

What the Bible Says About Debt

Of course, most of us know the Bible has a few things to say about borrowed money, such as:

“It is better not to vow than to vow and not pay.”– Ecclesiastes 5:5

The Bible doesn’t say that taking on debt is sinful behavior. But, it does warn that there are certain truths that about debt that are unavoidable. It forces us to recognize that debt is not the best use of the money God has provided us with, and that using it doesn’t always work out like we plan.

Like the recent grad with $50,000 in student loan debt that finds out her degree won’t make her enough to comfortably pay off the loan. So she’s stuck struggling to pay it off for decades while life continues to happen.

How about the business owner that borrowed money to keep his business afloat, only to find out his market has dried up?

Or the investor that had a plan to leverage borrowed money to make a greater return on investment. Everything works out great until the market tanks. Of course, it always will at some point.

Good debt comes with a lot more risk than many people realize. When it blows up in your face, it ends up causing a ton of destruction.

Debt can be used as a tool to create wealth. But all too frequently its use results in a jagged edge that cuts the wrong way.  However, when you use cash as your tool of choice instead, you find  it's always a tool with a much finer edge. It helps you accomplish your financial goals with much more freedom and much less risk, which achieves much more sustainable wealth in the long run.

Yes, I know not everybody gets that there is no such thing as good debt. But if you do get it, and you start to practice the art of eliminating debt and using cash instead, you will always succeed in a much greater way, guaranteed!

How to Get Out of Debt- The Ultimate Plan for Getting Out of Debt, Even if You Have No Money