You are here: Home / Investing / Building Wealth / Why the Rich are Getting Richer- and You Can Too!
107 shares 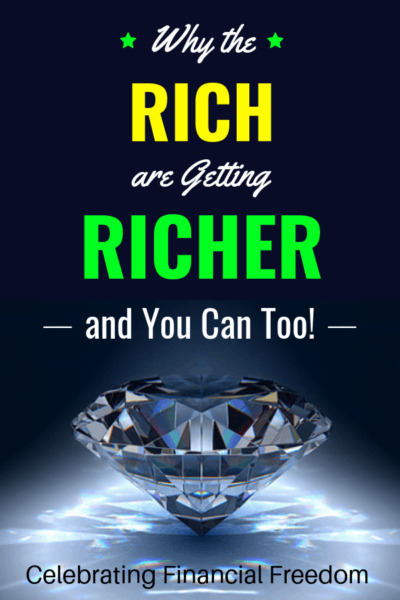 Why are the rich getting richer and the poor getting poorer?  It’s a question a lot of people are asking these days.  We hear on a daily basis how the middle class is shrinking, the poor are getting poorer, and the number of new millionaires is growing every year.  The extreme upper class (the so called “mega rich”) is increasing every year as well.

So why is this happening?

There are plenty of reasons. Some say it's about greed, the government, priviledge, or any number of other things beyond any one person's control. However, one of the biggest reasons is that America (most of the people reading this post right now) has become a nation of people in perpetual consumer debt.

In this article, I'll show you:

Contents hide
1 Debt Makes You Poorer
2 You Won't Get Rich With Consumer Debt
3 Why is Consumer Debt Such a Problem?
4 Why the Poor (and Middle Class) are Getting Poorer
5 The Rich Understand Money
6 What Robert Kiyosake Says About the Rich Getting Richer
6.1 Four Things that Conspire to Keep People Poor
7 5 Simple Rules for Getting Richer
7.1 Always Spend Less Than You Make
7.2 Always Have a Plan for Your Money
7.3 Make Saving a Priority
7.4 Invest Your Money
7.5 Never Compromise Good Financial Habits
8 What Does the Bible Say About the Rich Getting Richer?
9 You Can Be Smart With Money Too

The number one thing that makes so many people poorer, while enriching those who know how to use money better, is consumer debt.

You might ask, “Don’t we need debt just to live a normal life these days?”

Do you live a normal life if you’re in debt?  Unfortunately, yes.

For about the last 40-50 years, credit card companies, banks, and other lenders have been chipping away at the basic values of saving and living on less than you make that were once common.  They encouraged us through their marketing to use borrowed money to increase our lifestyle using easy monthly payments.

You Won't Get Rich With Consumer Debt

The only problem with that is that when you use consumer debt, you lose financially.

Where does all that money go?  It goes to the credit card company, the bank, the car dealer, and the department store.  It goes to people who understand money and know how to get it from those that don’t.

Money goes to the people that have a plan.

Why is Consumer Debt Such a Problem?

Consumer debt has become a way of life for a several reasons:

Consumer debt is a path of least resistance. It lets you have what you want right now, for easy monthly payments, with little money out of pocket.

But the end result is that the people who can least afford it end up paying extra for everything! It's a never ending cycle that keeps you in bondage as long as you decide to keep using it. It's all about personal responsibility.

Why the Poor (and Middle Class) are Getting Poorer

One of the biggest reasons (but not the only one) so many people are hurting while the rich are getting richer, is that the average American family lives on more than they make.

They purchase groceries, restaurant food, new cars, and most everything else with credit cards and monthly payments. It costs thousands of extra dollars a year to finance, but most people look at it as being normal.

Consumer debt creates a false sense of prosperity that actually results in the opposite, which is bondage and slavery.

If most people would sit down and run the numbers, they'd be shocked at how much debt is costing them every year!

That brings me to share with you one of the most basic principles of money that many people never really think about or act upon.  That principle, simply put, is this:  Money will always flow to those who understand how it works, and away from those that don’t.

It doesn't take any special talent to understand money, just a willingness to constantly keep learning and applying what you learn.

What Robert Kiyosake Says About the Rich Getting Richer

Famous financial author Robert Kiyosake says “It is our educational system that causes the gap between the rich and everyone else.” He says that real financial education is not taught in schools, and that is one of the big reasons why so many people struggle financially.

Kiyosake also says there are four things that conspire to keep people poor:

He says these concepts work in favor of the rich so money will flow to them. Of course, this keeps people who don't understand them poor. Once you understand these forces and how to counteract them, then you can become rich too!

You can find his complete thoughts on the subject in his bestselling book, Why the Rich are Getting Richer.

5 Simple Rules for Getting Richer

The 1% don't think or act like the rest of us, and this is why they are the 1%. So when it comes to building wealth, the first thing you should understand is that you have to learn to think and act differently when it comes to money.  Below you'll find a few simple rules to help you eventually become indpendently wealthy.

Always Spend Less Than You Make

This should be common sense. Unfortunately, most people spend more than they make. When you live with consumer debt and no real plan for your money, you'll never get ahead.

Always Have a Plan for Your Money

Believe it or not, research shows that the rich people who stay rich live on a budget. They know that when they have a proper plan for how they spend money, they will never spend more than they make. I always recommend using a monthly zero-based budget that never allows you to spend more than you make.

Check out the CFF Budgeting Page- Everything you need to start a budget, including free printables!

Most people, if they save at all, save money that's left over after paying the bills. That's a sure sign that you have no plan. Those who become rich make savings their top priority before paying the bills. I always teach that you should pay yourself first (or second if you're a tither).

Your money only grows if you invest it. If you don't have an IRA, Roth IRA, or have opted in to your company's 401k, what are you waiting for?

Believe it or not, the research shows that the average millionaire got there by investing in the stock market through the traditional retirement plans listed above. Building lasting wealth is not made in short term trading, but the result of investing consistently over a long period of time.

Those who become wealthy don't compromise. They practice personal responsibility, build good financial habits, and practice them for a lifetime. You hear all kinds of stories about people who get rich quickly, but you don't hear about the ones that build it one paycheck at a time over many years. This is how most people build wealth.

Those get rich quick people, they don't stay rich for long because they didn't build the right habits.

Below you'll find some great resources about how average people get rich by building wealth one step at a time.

Everyday Millionaires: How Ordinary People Built Extraordinary Wealth―and How You Can Too by Chris Hogan

7 Habits of Wealthy People That Will Make You Rich Too!

What Does the Bible Say About the Rich Getting Richer?

Even the Bible has plenty to say about wealth. Of course, I won't get deep into that here because I could write a book on the subject.

However, I do want to focus on one particular verse that rings true:

“To those who use well what they are given, even more will be given, and they will have an abundance. But from those who do nothing, even what little they have will be taken away.” Matthew 25:29 NLT

Most people don't really seem to put a lot of thought into it, but this verse demonstrates a lot of common sense.

Like it or not, most people get rich because they earned it. They figured out what it took to make a lot of money and took action.

Therefore, since they have what it takes to become financially free, they will always have the ability to build more and more wealth.

On the other hand, those who don't do what it takes to build a legacy of wealth will continually struggle. In fact, it says about those who do nothing, even what they have will be taken away (the poor will become poorer). There's that personal responsibiltiy thing again!

It's one of God's universal laws from the beginning of time!

It's not about privilege or some kind of special status, it's about how you use what God provides you with that determines whether you will have more, or will continually struggle financially.

Below you'll find some of my best resources on faith and finances to help your understanding further.

9 Lessons on Finances and Success from King Solomon

Why Are The Rich Getting Richer? Here's the number one reason:

You Can Be Smart With Money Too

When it comes down to it, you have to come to the conclusion in your own life about how you want to live it. It doesn't matter if you have a low income or a high one, how broke you are has everything to do with how you handle your money.

Do you want to be working to make someone else richer and be in bondage to them through the almighty monthly payment?  Or would you rather work to preserve and multiply what you have because you were wise and escaped from the trap of perpetual debt?

Yes, the rich are getting richer, but that doesn't mean you can't join them.

I won’t demonize the rich, most of them are rich not because they take advantage of people (they usually don't stay in business long if they do), but because they understand the basics of money.

You don’t have to be one of those “normal” broke people.

You can be smart with money too.

If you want to be rich too, get yourself out of debt and change your family tree forever.

You can change your relationship with money starting today by taking my online course, The Divine Art of Money- 21 Days to Manage Your Money Like a Pro! and start succeeding like you never have before.

Question:  Have you done anything to change how you handle your finances?

The Miracle (or Curse) of Compound Interest

How Do I Start a Monthly Budget?