You are here: Home / Money Mindset / Win the Lottery or Live Twice as Long- Would You Choose Time or Money?
132 shares 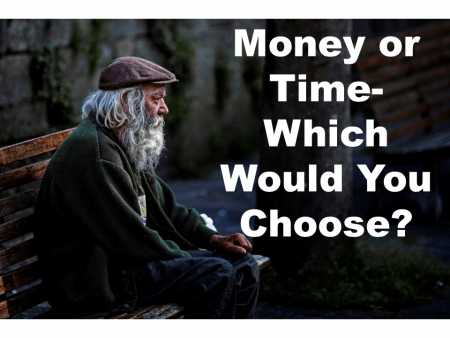 A couple of days ago I was listening to a podcast by Andy Andrews that posed an interesting question:  “Would you rather win the lottery or live twice as long?”

It’s such an interesting question that I thought I’d weigh in on it, and ask you to do the same at the end of the post.

In the podcast, Andy says he’d rather live twice as long.  One of the main reasons was that he was concerned that extreme amounts of money might make him less likely to continue his calling as a writer and speaker who changes lives for the better.

His point was that he produces more and better work when he’s under the pressure of needing to feed his family.  He’s a happier, more productive human being, and he changes more lives when he’s under pressure to produce life changing content.

He even spoke of two friends, one very successful in his career, and one who never quite achieved the same success, despite having most of the same circumstances.

Andy speculated that the other friend never achieved great success because he had become indpendently wealthy from a large inheritance.  He wasn’t under as much pressure to achieve because he didn’t need to.

These are certainly valid points. We’ve all seen people who won the lottery, or who inherited a large sum of money, and all it did was magnify their stupidity while demotivating them at the same time.

It’s extremely easy to become lazy and unproductive when you have much more money than you need.  So I get Andy’s logic as to why he made that choice.

But let’s look at the flip side of the debate.

Specifically, there are two points I’d like to make:

Choosing to live twice as long might seem like an obvious choice, especially to those of us who are Christians.  It seems to be the more spiritual of the two choices because we don’t want to seem like we love money too much.

To many, money is a finite thing that can’t bring happiness on its own, so it seems that longer life might be better.  But will a longer life make you any happier or enhance your life in any way?

That’s a hard call to make.

First, none of us really knows how long we have on this Earth.  If you knew you would die very soon, you’d probably be happy to choose to live twice as long, and that would be a wise choice.

But let’s look at the average life span.

In the U.S., the average life span according to this Google search is 78.7 years.  So if you live twice as long as the average person, you’d live to be just over 157 years old!

Could you imagine being a centenarian for 57 years?

It’s hard to imagine reaching the age of 100 and remaining reasonably functional, much less 157!

I’m not sure being that old for that long would be something I’d want to do.  It seems to me that would potentially be a very difficult life to live due to physical limitations, cognitive decline, and the distinct probability of outliving the money you made during your working years.

You would also have to go through losing every one you love at some point in your life.

On the other hand, suddenly getting hundreds of millions of dollars and continuing with a normal life span might be a better deal.

I do realize that huge amounts of money can be a corrupting influence in a person’s life, but it’s not the money that’s the problem, it’s how the person reacts to the money.

Just like Andy, I would also be concerned about becoming complacent if I had that much money.

But I also realize that having that much money can allow a person to become insanely generous as well.  It can serve to accelerate and enhance one’s purpose on Earth just as easily as it can take away from it.

You can waste it all, or leave a legacy of generational wealth that long outlasts your life.

That much money, properly invested and placed in the right hands, can change the world.

Gates and Buffet are two of the richest people in the world, and they have committed most of their billions to curing diseases, expanding educational opportunities, and reducing poverty.  The extreme amounts of money under their control helps them save literally millions of lives each year.

These stories of generosity are more common than you might think.  There are wealthy, generous people who are changing the world for the better every day that you never hear about because negative stories about greed and corruption make better headlines.

Time and Money Can Both Be Wasted

In the end, I believe in the right person’s hands, great wealth could be better than a long life.

It all comes down to what you do with your life and what you’re given.

You can waste both no matter how much you have.

So the inevitable question arises.  Would you rather win the lottery, or live twice as long?

By the way, if you’ve never heard of Andy Andrews, this guy is brilliant writer, storyteller, and thinker that will knock your socks off!  Make it a point to visit his home page and check out his books here.