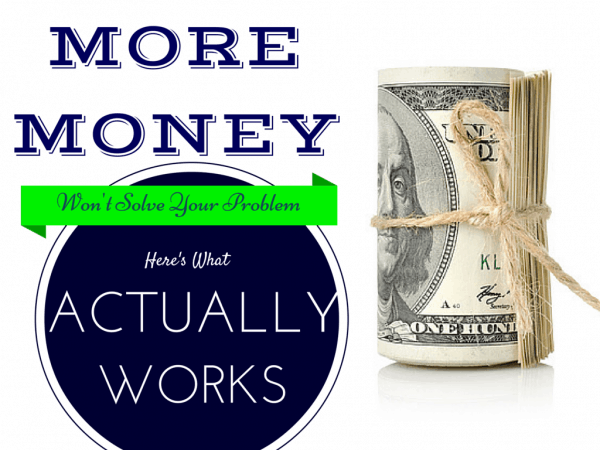 How many times have you said to yourself, “if I could just make more money, I’d never have to worry about finances again”, or “if I had x amount of dollars, all my financial problems would be solved for good”.

When you’re struggling financially, it’s easy to believe more money is the best path to financial freedom.  You believe that more is better, and life would be much different if you could just make another $5,000, or $20,000, or $100,000 a year.

But if you are deep in debt and living paycheck to paycheck, wondering how you’re going to keep the train rolling for another month, more money is not going to solve your financial problems.

I can hear you now, “But Doc, if I just had more money, I could pay off my credit cards, my car loans, and my other debt, and I’d be out of debt in no time!”

It’s because being deep in debt is not about money and numbers, it’s about behavior.  Making more money is great, and it can help you get out of debt much faster when you use it wisely.  But if you don’t learn to change the behaviors that got you into debt in the first place, you’ll just end up back in debt, but with bigger numbers.

Ask Yourself These Questions

So if you have a debt problem that’s gotten to the point where it’s ruling your life and making you a nervous wreck, sit down and start asking yourself questions about which beliefs and behaviors got you into debt in the first place.  Here are some of the more common issues that I run into when counseling people financially:

Once you’ve finally gotten brutally honest with yourself and decided to delve into all the reasons why you got into debt, now it’s time to start figuring out the things you’ll need to change so you can get out of debt permanently.

4 Things You Must Have to Solve Your Money Problems

The top things you have to do all revolve around a change in mindset, actions, and beliefs about money and how you handle it.  So let’s check out some of the things that have to happen to solve your money problems:

You Have to Change Your Mindset

You have to change any limiting beliefs such as “debt is a necessary evil” or “I’ll always be in debt” or any others.  It’s way too easy to fall into the trap of thinking like everyone else when it comes to money.  But when you start thinking like a wealthy person instead of the average broke adult, then you can start taking huge leaps forward financially.

This is the best companion to changing your mindset.  Changing your mindset is great.  But if you don’t follow it up with action, you will never make any progress financially.  Learn to keep track of your money with a budget, start an envelope system, make a plan for paying cash for your next car, make a plan for getting out of debt.  These are all things you can easily do if you take the time and make the commitment to see them through.  Action is what gets the job done.  Here are a few free blog posts that will show you how to do those things:

How Do I Start a Budget?

How to Start an Envelope System and Budget With Cash

The “How Do You Get Out of Debt?” Series

My Book on How to Make a Budget

Live on Less Than You Make

It sounds like such a simple concept, but most people don’t do it.  In fact, most people don’t really know if they are spending more than they make or not because they don’t keep track of spending like they should.  Part of changing your financial habits means you should be keeping track of how much money is coming in vs. how much is going out.  When you make sure that expenses don’t exceed income, then you’ll be able to start making huge progress in your financial situation.

It’s essential that you learn all you can about money and how to use it well.  It never ceases to amaze me how many people don’t know the basics such as how to make a budget, spending less than you make, and how to automatically save a percentage of your pay for the future.  Making more money will never benefit you if you don’t at least know the basics.  Money is a subject you should always be seeking knowledge about.  The more you know about money, the more your money will grow.

Trying to solve your money problems by making more money is only going to magnify the problems you already have.  It’s like trying to fix a drug problem by using more drugs.  It might feel good but it just digs a deeper hole that’s much harder to climb out of.

Of course, making more money is a great thing, I highly recommend it!    It can go a long way toward solving your money problems and building your wealth.

But only if you already have the right mindset, actions, and knowledge in place.

Be Weird and Wealthy

When you use these four powerful points to change the way you approach your finances on a daily basis, you’ll start to see a turnaround that merely making more money just can’t provide.  These are the tools that will take you from being average and broke, to being weird and wealthy.  It certainly won’t happen overnight, but the more you drink the Kool-Aid and understand that you can’t do what the average person does and get exceptional results, then you will see a difference in your financial life.

If you want to learn more about how to start your transition from average and broke to exceptional debt freedom. You may want to check out my Celebrating Financial Freedom online course .  It teaches you everything Angie and I did to get out of debt and get on the right track financially.  It has received only 5 star reviews for a reason… because it works!

Question:  Have your mindset, habits, or lack of knowledge held you back from being successful financially?  Leave a comment and tell me about your struggle.