You are here: Home / Money Mindset / Debt vs. Ownership- How to Create an Ownership Mentality
633 shares 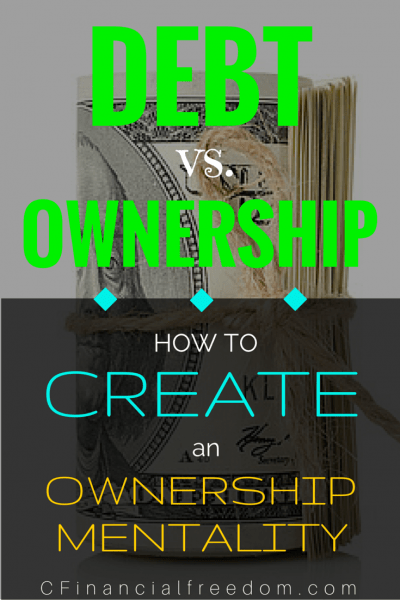 Debt vs. ownership is a concept that I've been thinking a lot about lately.  I've come to the realization that too many people simply don't understand the effects debt has on their lives.  Once you truly understand the multitude of consequences of being in debt, you discover financial opportunities most people don't realize are possible.  The key is to develop an ownership mentality.  Once you change from a debt mindset to an ownership mindset, you'll see changes in your life you never thought possible!

In this article I'll show you:

You and I are constantly encouraged, through tons of marketing messages, to buy things we can't afford.  We allow those messages in and put pressure on ourselves to own the latest and greatest stuff, even if we have to go into debt to buy it.

Easy monthly payments sound like a convenient option, but you soon find out those “easy” payments keep you in long term bondage.  Too many of us don't think about the downsides of being in debt.  After all, you have to have debt to make it in today's world, right?

There are serious downsides to being in debt.  Everybody knows about them, but not many want to do what it takes to avoid them in their own lives.  Those downsides are problems like:

But why is debt such a stressful thing?

It’s because debt is a lie– especially consumer debt.

Debt creates a false prosperity that makes you feel wealthier than you actually are.  It keeps you tied to your monthly payments, taking away your freedom for the promise of getting something now instead of later.

This false prosperity is contradiction that makes you feel successful while it sucks you dry financially.  Nobody can live in that contradiction without the consequences rearing their ugly head.

The Consequences of Debt Mindset vs. Ownership Mentality

The Consequences of Being in Debt

Owning something and being in debt for it are two completely different ways of approaching your financial life.

When you owe money:

The results of these consequences are:

Debt vs. Ownership- How to Create an Ownership Mentality and Never Be a Slave to Debt Again!

The Consequences of Ownership

On the other hand, when you decide that actually owning your stuff is better, there are consequences to that way of life too.

When you own your stuff:

How to Have an Ownership Mentality

So how do you make the transition from a debt mindset to an ownership mentality?  The first thing you have to do is believe that consumer debt is a drain on your life.  Believing you can never have nice things or a comfortable life without resorting to credit has to become a thing of the past.

Truth is, you CAN have nice things, but only if you can pay cash for them (yes, even a car!).

But you won't achieve it without changing the way you think about money and debt.

There Also Has to be a Change in Your Actions

You need to do a few things you haven’t done before:

Of course, you also have to realize who really owns it all, and that is God.  When you truly understand that, a shift starts to happen in your life.  You understand that He will bless you when you are a good steward of what He has given you.  When He knows He can trust you with that, He has no problem providing you with more.

In fact, ancient Jewish wisdom encourages each person to have an attitude of ownership toward everything in this world.  Ownership comes with a responsibility and accountability to use those things wisely.

When you act like an owner, you get the benefits of ownership, and you'll live a more blessed life.

Question:  Do you have an ownership mindset?  If not, what do you think has held you back from developing that mindset?