You are here: Home / Manage Money / Budgeting / 5 Budgeting Excuses and How You Can Overcome Them
107 shares 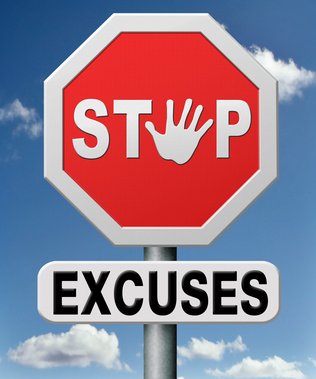 Making a monthly budget for your money before you spend it is a habit I’ve been recommending for years. I’ll keep recommending budgeting until everybody gets it.  In today’s post, I’ll cover the most common budgeting excuses, and how to overcome them.

I'll also give you a ton of resources at the end to help get you moving in the right direction.

A Budget Is An Awesome Tool

Consistently making a budget is the #1 action you can take to start getting your finances under control so you can stop living paycheck to paycheck and never spend more than you make.

But no matter how much I say about what an awesome tool budgeting is for getting control of your finances, I still hear plenty of excuses from people about why they can’t, or won’t, do a budget.

The Top 5 Excuses For Not Budgeting

So I decided to make a list of the top five budgeting excuses, and how you can overcome each one to start getting control of your finances for good.

Ok, I know budgeting is not sexy, cool, or even the highlight of your day, I get it.  But what’s better, being frustrated financially and letting your money leaks drain away your paycheck, or being proactive and exercising total control over your finances?

Total control sounds like a lot more fun to me!  Get over the “boring” excuse and show some interest in keeping your finances running smoothly.

Budgeting Excuse #2: I Don’t Need to Write It Down

If you’re one of those people who says you can keep track of everything in your head, then you’re deceiving yourself.  Unless you’re the “Rain Man”,  then you only have a general idea of where your money is going.  A solid, zero based budget shows you  how to spend your money on paper before you spend it in the real world.

There are a lot more moving parts to a budget than you can't keep track of in your brain.  Write it down, or you can even use an app.  You’ll see a huge difference compared to what’s in your brain.

I know making a budget probably isn't your idea of fun, but it's not Newtonian Physics.  Don’t let this lame budgeting excuse keep you in debt and stressed about money for years because you’re not a “math person”.

Overcome the fear, use a calculator, and learn to get your finances on track for good!

Budgeting Excuse #4: I Keep Track of My Spending

A good zero based budget, done at the beginning of the month, before you spend the money, allows you to be proactive instead of reactive.  It provides direction on how to spend your money instead of showing you how it got spent.

Planning your spending in advance with a budget, is always better than figuring out what you spent in the past, after potential damage may have already been done.

Budgeting Excuse #5: I Don’t Have Time

Really?  You can spare 30 minutes a month?  C’mon!  It’s true that it takes longer when you first get started budgeting because you’re doing something new and it takes time to get the hang of it.  But after you’ve done it 2-3 months in a row, you get to be a pro at it.  After that,  it won’t take more than 30 minutes or so.

Seriously, you can spare 30 minutes a month if it means saving literally tens to hundreds of thousands of dollars over your lifetime, and reducing the stress of not knowing where all your money is going.

What's your excuse for not budgeting? Here are the top 5 & how to overcome them via @DrCabler

What I’ve Learned From Making Excuses

I know from personal experience what it’s like to make excuses when I need to change something in my life.  Angie and I spent a lot of years languishing financially because we didn’t make the effort to take those first steps.

What I’ve learned is this:  starting anything is a lot easier the more you do it.  I’ve gotten out of the habit of making excuses.  I’ve learned to just dive in head first much more quickly than I once did.

I still have my momentary lapses with excuse making, but now I recognize the excuses and eliminate them, then take action instead of procrastinating.

Look, there are a lot of excuses for not making a budget and learning to be proactive about your financial situation.  These are just the top five.  If you don’t really want to start solving your financial challenges, you’ll find plenty of reasons not to do it.

If you do want to change, you’ll get past all the lame budgeting excuses and dive in head first.

Action is what gets stuff done!

Here’s Everything You Need

I’ve written extensively on budgeting in the past, and have plenty of resources available to get you started.  Most are free, and a couple are paid, but if you want to get control of your finances instead of letting  them control you, here’s the best place to get started:

How Do You Start a Budget?

Why Your Budget Doesn’t Work

How Do You Start a Budget (Round 2)

How Do You Budget on a Variable Income?

Course:  The Divine Art of Money- 21 Days to Manage Your Money Like a Pro! online course.  An online course that teaches everything you need to know to manage your money better, and never again spend more than you make!

Read all my posts on budgeting here