You are here: Home / Manage Money / Retirement / Never Make an Early Withdrawal from Your 401k! Why it Will Cost You Big Time
113 shares 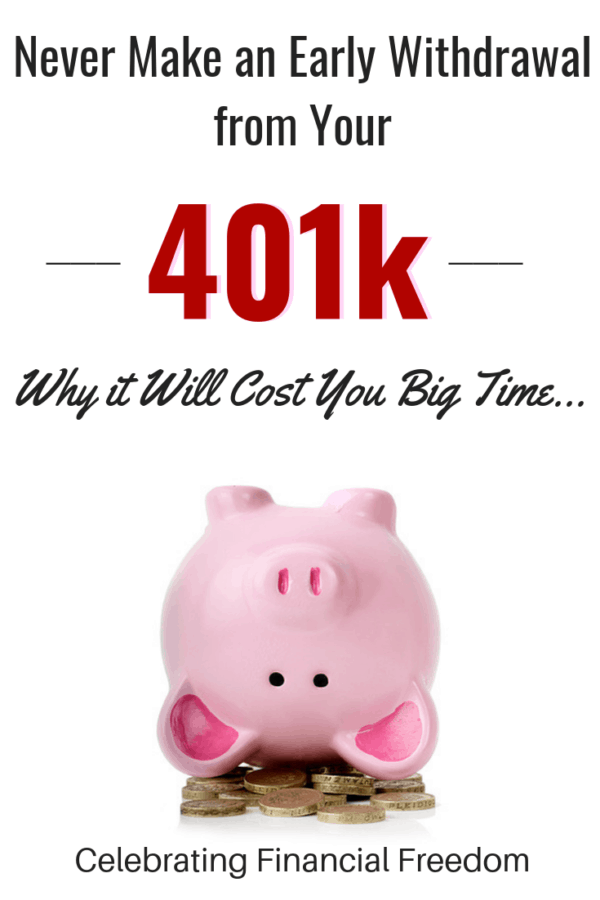 In fact, 2 out of 3 millennial homeowners said they had regrets about purchasing their home.  They stated they felt stretched financially by the costs of maintaining a home.  Overall, it seems that many millennial homeowners did not think through their purchase as well as they should have.

I believe one of the biggest mistakes you can make in purchasing a home or paying off debt, is to withdraw money early from your retirement accounts.  It has HUGE consequences that most don't take into account before they do it.  In this article I'll show you why making an early withdrawal from your 401k (or other retirement accounts) to pay off debt is a terrible idea.

Should You Use a 401k Early Withdrawal?

So, when you need a large chunk of money to put a down payment on a house or pay off some debt, there are many ways to approach it.  But I know from experience and basic human nature, most of us want the easy way out.

When you know you have a pile of money in your retirement account just sitting there, it's extremely tempting to use it.

You tell yourself “I’ve got $20,000 in my 401k and I owe $20,000 in credit card and other debt.  I can be debt free if I just use that money that’s just sitting there doing nothing. Paying down debt and not having to pay all that interest would be a good thing, right?”

Or when it comes to buying a house you might say “It'll take me years to save up for a down payment! I'll just use this pile of money in my retirement accounts and pay it back later.  That's a good decision, right?”

Should you ever withdraw money from your 401k to pay off debt or buy a house? Here's the surprising answer-

If You Withdraw Early from Your 401k, There Are Consequences

At this point, you have automatically lost 35% of your money before you could even put it to work! This is a terrible way to manage your finances.

The next thing you should understand when you withdraw money early from a retirement plan, is that you sabotage your future security to to satisfy a present need.  When you take that money out, it won’t stay put and grow exponentially as the market rises over time.

So now because you didn't think clearly, your early withdrawal cost you $150,000 to fix a $20,000 need!  This is the point where you form a right angle with your thumb and forefinger and raise it to your forehead, you are officially a loser, financially speaking.

On the surface it sounds like an ideal situation.  With a 401k loan:

Winner, winner, chicken dinner!  This sounds like a no brainer, right?  You borrow money from yourself and pay it back with interest over time- sounds like a great deal!

Consequences of a 401k Loan

There is a problem with using a 401k loan, though.  Taking that money out of your retirement account means it doesn't have the opportunity to grow through investing.

I know what you're thinking.  The money DOES grow because you're paying yourself back with interest over time.  So technically, yes, your money is making money and growing.

But think about this- who would you rather be paying interest into your 401k, you or the stock market?

I know I would much rather have other people (the market) growing my money for me instead of doing it myself.

It's a serious consequence of a 401k loan most people don't think about.  But it's a real problem if you want to grow your little nestegg into a full blown retirement someday!

When it comes down to it, withdrawing money early from your 401k causes more problems than it solves.  If you're using the money to pay off debt, it doesn't cause you to change the habits that got you into debt in the first place.

It simply acts as a Band-Aid to help the situation for a season.  If you don't change behaviors with money, you will end up back in debt once again.

If you're using the money to fund a down payment on a house, that doesn't solve your problem either.  Part of owning a house is about being financially solvent enough to afford homeownership.

If you're robbing your 401k to make a down payment because you can't save up the money for it, you probably don't need to buy a house until you can.  You may need to change your spending habits or find ways to increase your income instead of robbing Peter to pay Paul.

Below you'll find some of my best resources to help with that.

The CFF Get Out of Debt Online Course

12 Wise Steps for Buying a House

Question: Have you ever made an early withdrawal or taken a loan from your 401k?  What was your experience?  Leave a comment and tell us about it.