You are here: Home / Manage Money / Saving Money / Save For Retirement or Pay Off Debt- What Should You Do First?
590 shares 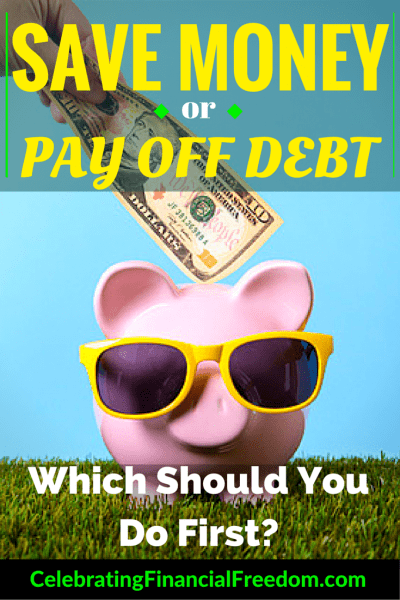 One question I hear quite often from readers who are getting out of debt:  “Which should I do first, save for retirement or pay off debt?”  It’s a common question that leaves a lot of people confused.  There is plenty information available on the subject.  But no clear consensus about the best way to proceed when you’re concerned about both paying down debt and saving for the future.

Paying Off Debt or Saving For Retirement, Which is More Important?

Paying off debt and saving for retirement are extremely important to managing your financial health, now and over the long term.  But is one more important than the other?

I don’t necessarily think so.

Here’s why both are extremely important:

Now that we know that saving and paying off debt are both extremely important to your financial health, let’s do a comparison.

First, let’s take a look at the advantages of paying off debt first, then saving for retirement.

Save For Retirement or Pay Off Debt- Which Should You Do First?

What If I Pay Off Debt First?

When I talk about paying off debt first, I’m specifically talking about consumer debt.  Consumer debt consists of debt on things such as vehicles, credit cards, student loans, etc.  Basically, consumer debt is most every debt you have except for your house.

So what are the advantages of paying off debt first, then saving for the future?  Here are the 3 main advantages I can think of:

What If I Save For Retirement Before Paying Off Debt?

Some financial gurus recommend continuing to send money to retirement accounts at your roboadvisor while you’re paying off debt.  You can do that if you choose, but there are good and bad consequences to doing both at the same time.

Which Should I Do First, Save or Invest For Retirement?

As a general rule I believe it’s best to make a get out of debt plan and pay off all consumer debt before saving money for later.  That way you’re sure to have the right financial habits in place that allow you to save as much as possible for your future without wasting money on debt payments in the present.

Saving and Investing Are Dependent on Developing Good Habits

Saving money for retirement and getting out of debt are two of the most important things you can do financially.  How much you can save for your future is directly related to how much debt you have now.

This is why we read so many reports about the dismal state of retirement saving in this country and the huge numbers of people living paycheck to paycheck.  The average Joe spends more than he makes, doesn’t save for retirement, and doesn’t make an effort to turn those things around.

But when you finally decide to make a change and treat your finances with respect, the turnaround will be dramatic!  That means developing good habits like getting mad and naked, doing a budget, and deciding you will never go back into debt.

So if you want to be rich in retirement, change your habits now.  It will pay off bigtime for your future!

Question:  Do you think you should pay off debt or save for retirement first?  Leave a comment and let me know what you think.