You are here: Home / Manage Money / High Income / How to Earn Six Figures and Still Be Broke
447 shares 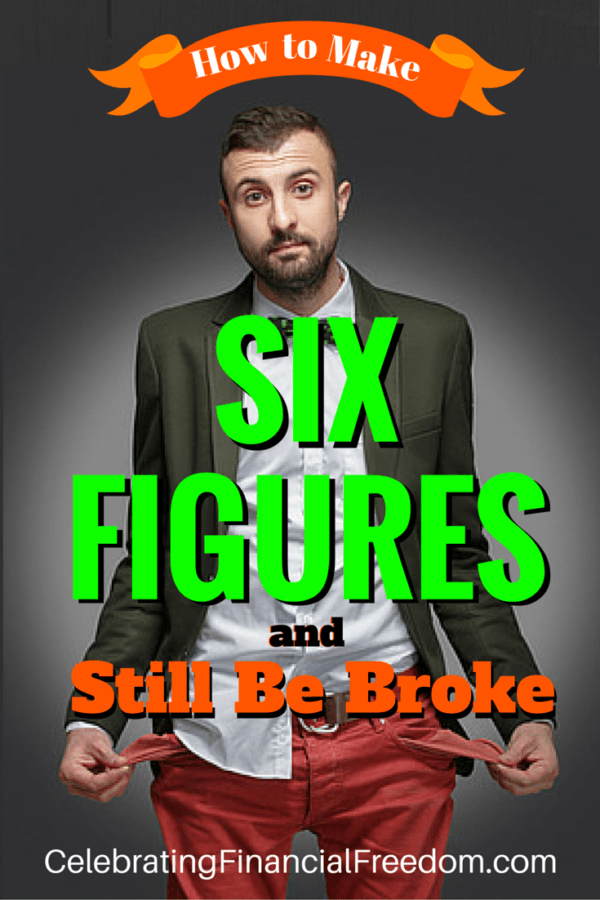 Six figures and broke.  Sounds like a problem that somebody made up.  But earning a six figure income and living paycheck to paycheck is a much more common problem than you might imagine.

Amazingly, at least one-fourth of people making a six figure salary are struggling financially every month.

So how does that happen?

Contents hide
1 You Can Still Be Broke With a High Income
2 The Biggest Myth About Earning Six Figures
3 Six Reasons You Can Earn Six Figures and Still Be Broke
3.1 You Feel You Deserve a Larger Lifestyle
3.2 You Feel Pressure to Keep Up With the Joneses
3.3 You Have Huge Student Loans
3.4 You're Not Managing Your Money Well
3.5 You Live in an Area With a High Cost of Living
3.6 You Eat Out Too Much
4 Making Six Figures Doesn't Mean You're Rich

You Can Still Be Broke With a High Income

There are a lot of reasons why high income earners struggle financially, but in most cases it's totally preventable.  It’s certainly not from a lack of earning power.

But for a lot of people making six figures, that’s just not the case.

One of the traps that a lot of people fall into is believing that making a lot of money will solve their money problems.  I've talked to (and read plenty of articles about) people who did a great job managing their finances when they made a small income.  But as their income increased they had more and more problems keeping the bills paid.  Even worse, the more money they made the less they saved.

They discovered that how much you make has nothing to do with financial security.  It's all about how you approach money management and spending that makes all the difference.

Six Reasons You Can Earn Six Figures and Still Be Broke

So I thought I'd make a list of the most common reasons why someone making a lot of money can still struggle month to month.  If you earn a high income and still live paycheck to paycheck, you might recognize yourself in some of the reasons below.

After each reason, I'll also include a way to fix the financial issue so you can succeed with money as your income increases.

You Feel You Deserve a Larger Lifestyle

As your salary increases over time, it's only natural to want more and better things.  Problem is, some people accelerate their lifestyle quicker than their salary.

When you work your way up to a six figure income, it's easy to justify taking on more and more expenses.  But eventually, the attitude of “I deserve a fancier car and a bigger house” results in a massive pile of monthly payments.

After a few years you realize you're drowning in payments.  You wonder how you can make so much money, yet still have no breathing room financially.

Solution:  Just because you make more money doesn't necessarily mean you should spend more.  As you make more money, first make sure you save more money before you do anything else.  Then be very deliberate when taking on lifestyle changes that cost a lot of money, even if you feel you can afford it.

You Feel Pressure to Keep Up With the Joneses

When you make a higher than average income, it's easy to get caught up in comparisons.  When you see other people in your position driving beautiful cars and living in a massive house, it's natural to want to fit in.  But when you make those comparisons and try to keep up, you find out that it's not what it's cracked up to be.

The fact is, those people you're comparing yourself with are broke.  Even though they make a great living, they are very likely living paycheck to paycheck just like most people in this country.  You see the fancy lifestyle they live outwardly.  But what you don't see is the financial stress, money fights, and personal toll it takes to keep up the facade.

Solution:    Comparing yourself with others and trying to keep up will kill you financially.  The Joneses really aren't paying attention to what you have anyway.

Come to the realization that what others think really doesn't matter.

The Joneses don't pay your bills.

Be your own person and stop living your life trying to be like everyone else.  It's the people that are willing to be different that succeed the most.

Here's an excellent book that shows how successful millionaires really live as opposed to how most people think they live… You'll be surprised at what you read!

The Millionaire Next Door- The Surprising Secrets of America's Wealthy by Thomas J. Stanley and William Danko

You Have Huge Student Loans

I'm sure you've heard that student loans are a huge problem for a lot of people.  That can be especially true for high income professionals like doctors, dentists, lawyers, and others that require many years of expensive schooling for their chosen profession.

A huge number of professionals are entering the workforce with $200k – $300k in student loan debt that has to be paid back.  That's a bitter pill to swallow after all those years of sacrifice.  Unfortunately though, too many professionals start a career with that “I deserve it” mentality after all that sacrifice.  They get a job making six figures, then payments on a Mercedes and a fancy house, and struggle for 30 years to pay off their student loans.

Solution:  The best thing a young professional can do is spend 2-4 years living very frugally, putting every penny possible toward paying off student loans.  It's not sexy but it works!  After that you can have a long career making tons of money without that student loan monkey on your back!

You're Not Managing Your Money Well

Making a high income is no guarantee that you will have no financial problems.  In fact, you may be more likely to struggle financially if you make a lot of money (just ask Kanye West!).  Even when you make six figures or more, you still have to be diligent if you want to stay solvent.

This means you should do a written budget, just like I recommend for everyone else.  It also means not taking on a huge pile of debt.  C'mon, if you make a ton of money, you don't need a lot of debt to fund your lifestyle!  Staying out of debt should be easier for a high income earner than for the average person.

It never ceases to amaze me when I see a multi-millionaire celebrity getting their house foreclosed.  They should never have a mortgage in the first place when they make that much money!  It's a total lack of good money management that gets most six and seven figure earners into financial trouble.

Solution:  The basic rules still apply no matter how much you make.  Do a written budget and stay out of debt!

Read all my posts on budgeting here

Read my series on how to get out of debt here

You Live in an Area With a High Cost of Living

The cost of living in places like New York and San Francisco can be twice as much as most of middle America.  A six figure income just doesn't go as far in an expensive city.  Whether it's housing, transportation, food, or anything else, in these areas almost everything will cost more.

Solution:  When you live in an expensive area, you have to temper your expectations a little.  You should realize that making six figures in your area is equivalent to a middle class income in the rest of the country.  Therefore, manage your finances accordingly.

You Eat Out Too Much

This is a HUGE problem for some families whether they have a high income or not.  Some families can spend $1,000 or more every month just eating food from restaurants!  That doesn't include also buying groceries for the house!

Not only is restaurant food a bad deal, but it's usually not as good for you either.

There are a lot of excuses people use for spending a lot of money on restaurant food:

Of course, I'm not against eating out.

I do it once or twice a week myself.

But I am against compromising your financial situation to do it.

Here's the deal- most of the time it comes down to making the choice of least resistance due to laziness.  And that will get you into trouble every time!  It never ceases to amaze me how many people mortgage their future by eating restaurant food, paid for with credit cards, then can't understand why they can't save any money even though they make six figures or more!

Solution:  Here are a few things you can do to stop spending so much in restaurants:

A lot of people believe that making a high income means their money problems will go away.

It's just as easy to live paycheck to paycheck on a high income as it is on a modest salary.  If you have trouble managing your money with a small paycheck, you won't do any better when you're making six figures .

No matter how much you make, the key to winning with money is being diligent with what you have.

So be sure to use your money wisely, always have a plan, and you will always have more than enough!

Question: Have you ever fallen victim to any of the excuses above? Leave a comment on our Facebook page or below and tell me about your experience.